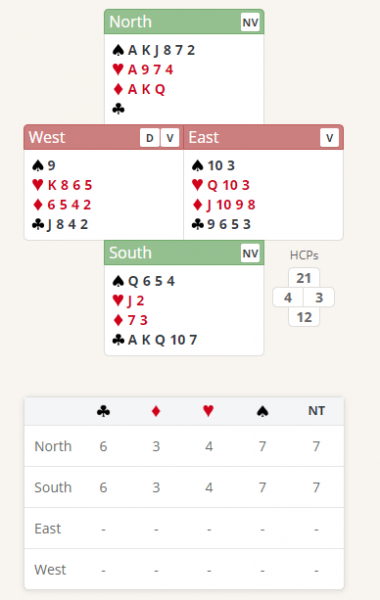 West deals and passes and while North has a magnificent hand, 1S is the correct opening bid. Why 1S and not a 2C game forcing opener ?  Mainly because you are playable in three suits. If you open 2C and rebid 2S you are only promising a strong hand with a good spade suit.

Now what? Now that the partnership is in a game force there is no need to lose your head and jump around.  The next step is for North to take command of the auction and find out more about South’s hand. Start with 3D – showing the Ace of Diamonds. Next South bids 4C to show the Ace of clubs (and deny having the Ace of Spades or Hearts).

North can now ask for Aces and Kings and settle for 6NT when South shows 1 Ace and 1 King. While North would love to bid a grand slam, they just cannot count 13 tricks and it is not worth the risk. Bid 6NT (remember, this is matchpoints where 6NT scores better than 6S).

Here’s the traveller: https://app.pianola.net/Results/Session356320/Travellers/16  – bidding 6S would have been an average but 6NT a 3rd top.